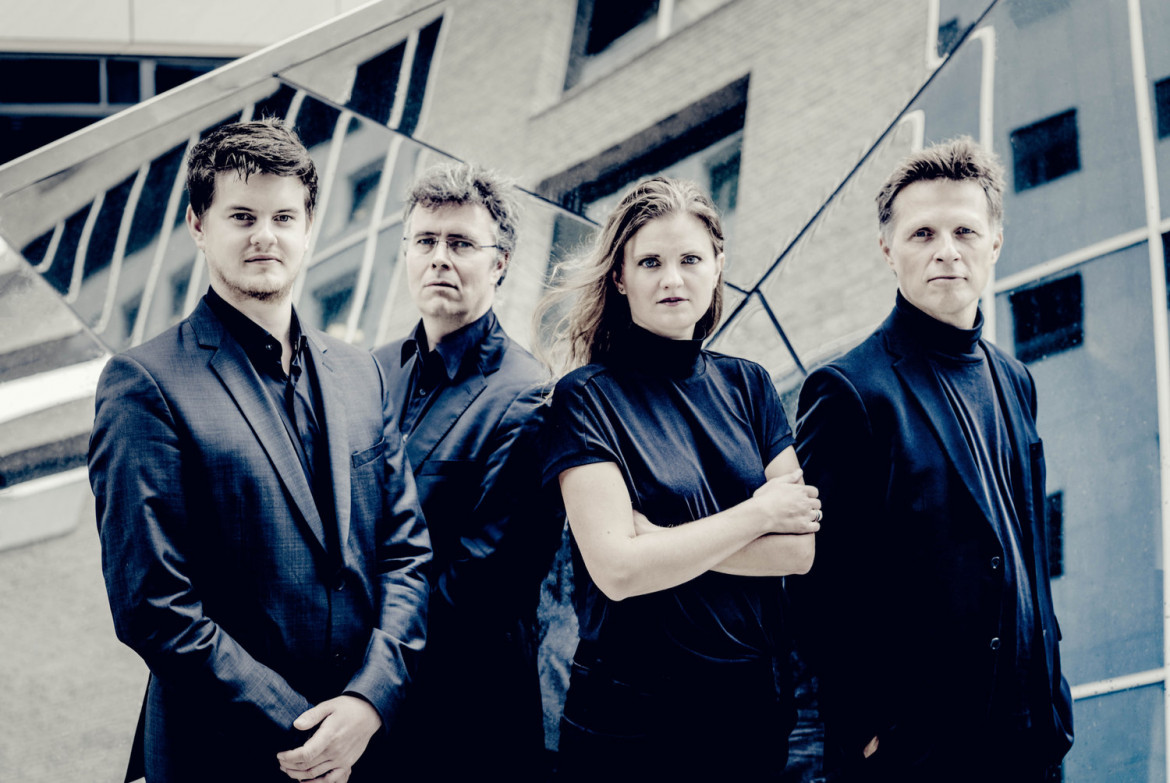 Solidly rooted in repertoire from the classical period to the present day, Oslo String Quartet has become one of Scandinavia’s most acclaimed and sought-after chamber ensembles. Their deep commitment and unique ability to combine intellectual approach with vivid presentation has attracted attention far beyond Norway’s borders.

Oslo String Quartet was founded in 1991 by violinists Geir Inge Lotsberg and Per Kristian Skalstad, viola player Are Sandbakken, and cellist Øystein Sonstad. The four members each had wide experience from playing with other ensembles and orchestras at home and abroad, coming together to form an élite group for refined studies of the chamber music repertoire. To begin with this resulted in an extensive series of concerts at the University Aula in Oslo, where Beethoven’s string quartets comprised the core of their programmes. In addition to other major works for string quartet, the series included several premier performances of works by Norwegian composers.

The group made their mark internationally when they achieved a place in the finals of the London International String Competition in 1994. At the same time their recording of Edvard Grieg’s complete string quartets was attracting attention abroad, and in 1999 the group’s recording of the complete string quartets of Carl Nielsen was selected as Editor’s Choice in the prestigious Gramophone magazine. After this came numerous recordings of important works such as Alban Berg’s Lyric Suite and Jean Sibelius’ Voces Intimae, and several newer works on labels including Naxos, CPO, Fabra and Aurora. Wilhelm Stenhammar's string quartets no. 3-6 were recorded by the OSQ 2006/2007, and will be released by CPO in 2011. The groups latest recordings are Grieg Revisited and a second volume with popular tunes arranged for the Quartet by Øystein Sonstad, both projects for the Fabra label.

From the very beginning Oslo String Quartet revealed a particular interest in new music, and they regularly commission and perform works by living composers. For their contribution to contemporary music they were nominated “Performer of the Year” in 1998 by the Norwegian Society of Composers, and in 1999/2000 they were awarded the Music Critics’ Prize. They have also been responsible for uncovering “hidden treasures” of the Norwegian quartet repertoire; it is thanks to Oslo String Quartet that we can today enjoy excellent recordings of works by Fartein Valen, Klaus Egge, Johan Kvandal, David Monrad Johansen and Knut Nystedt, among others.

Focus on presentation and experimenting with new and different audiences has always been an important aspect of the quartet’s activities. School concerts and mini-festivals with specially adapted programmes have provided useful insight into communicating with audiences. The “Beethoven Code” festival, during which Oslo String Quartet performed Beethoven’s complete string quartets for the second time, proved to be a major breakthrough, attracting new audience members from a great variety of backgrounds. The key to this success lay perhaps in the quartet’s close collaboration with a number of lecturers and speakers who at each concert offered a new perspective on Beethoven’s work.

In 2007 violinist Liv Hilde Klokk took over the position of second violin. The quartet arranged two new mini-festivals: “G-force” in conjunction with the hundredth anniversary of Edvard Grieg’s death, and “Schubert Mysteries”. As well as continuing the concept of a verbal perspective in the form of talks and readings, the latter festival also introduced various musical guests. The quartet has recently enjoyed a fruitful collaboration with the Stavanger International Chamber Music Festival, Stavanger City of Culture 2008, and the Norwegian National Ballet in a production called “På kammerset” (In private). Together with choreographer Jorma Elo they have developed a work for the stage which includes Schubert’s String Quartet in D minor, “Death and the Maiden”. The production has been staged in Stavanger and Kristiansand, and at Oslo’s new opera house.

As well as having been regular guests at all the major chamber music festivals in Norway for many years, Oslo String Quartet has been invited to major international events, including the Schleswig Holstein festival. The quartet has toured Germany and the rest of Europe, and given regular performances at London’s Wigmore Hall. Their USA début in 2005, at Carnegie Hall in New York, is the highlight of their international career to date.