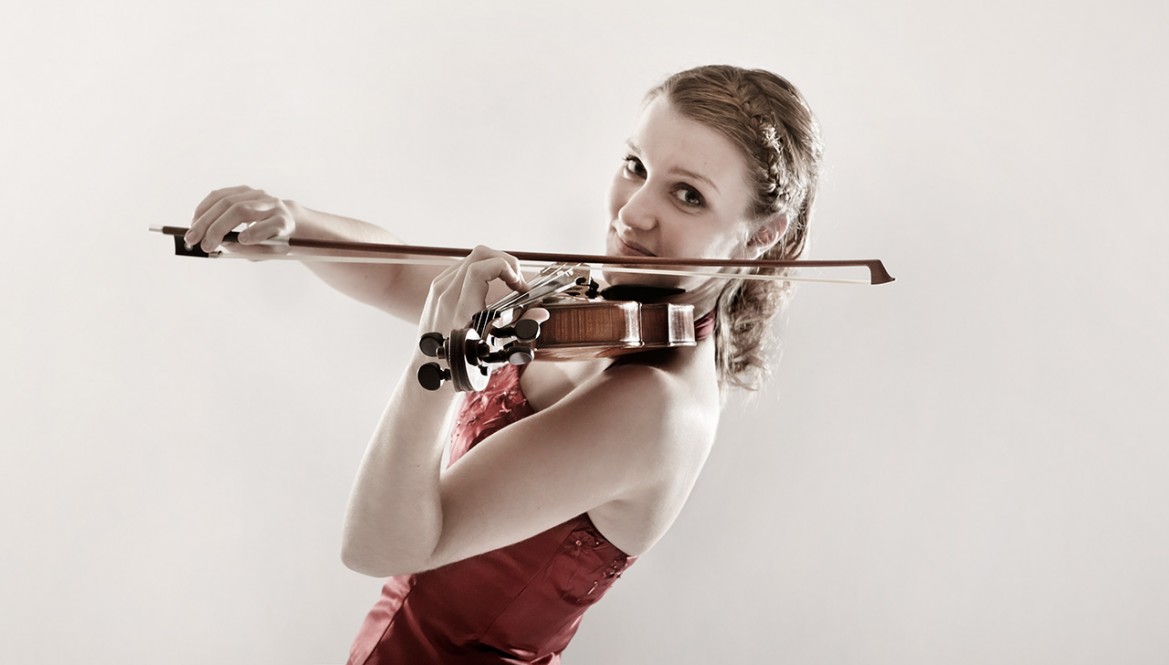 Guro Kleven Hagen (born 1994) made a highly successful debut playing Tchaikovsky with the Oslo Philharmonic conducted by Jukka Pekka Saraste in the 2010/11 season. In the same season she was also soloist with Norwegian Radio Orchestra in Prokofiev 2 Violin Concerto. She has performed with conductors like Christian Arming, Cornelius Meister, Ari Rasilainen and Eivind Aadland.

Engagements in 2013 include performances with the Tivoli Symphony Orchestra, concerts at the Risør Chamber Music Festival, recital at the Louvre Museum, Paris, and Spain Tour with the Oslo Camerata.
This very exciting young Norwegian talent is the prize winner of numerous International competitions, including the 2nd prize in the Eurovision Young Musician Competition 2010, and EMCY’s prize for Music in the Menuhin Competition 2010. She is the winner of the Norwegian Soloist Award in 2010, and was celebrated as Norway’s Young Musician of the Year in 2008.

Guro has performed in several international music festivals, including Verbier Festival Academy and Bergen International Festival, and has been soloist with orchestras in Norway, Estonia, Poland, Austria, Russia and Germany.

Guro is currently studying with Professor Antje Weithaas at the Hanns Eisler Hochschule für Musik in Berlin. Previously she has studied with Stephan Barratt-Due at the Barratt Due Institute of Music in Oslo, as well as Henning Kraggerud and Alf Richard Kraggerud. In addition she has participated in master classes held by leading violin teachers.

Guro plays on a Bergonzi (Cremona Italia, 1735-40), also known as the Kreisler-Bergonzi, kindly on loan from Dextra Musica.

Fabulous, Guro!
Bergens Tidende
6 June 2010
“Chaconne” (Bach) from Partita nr. 2 I d-moll for Solo Violin was the opening number, and the soloist had obviously decided to show her very best side. And what a talent. In full admiration for her supreme play. Exceptional intonation, crystal clear intervals and harmonies, a display of versatile use of the violin bow, and focused in all she does. And it continued in Ravel “Tzigane”, where the soloist played her way through the intricate gypsy dances. …. Simply impressive.
Great Talent
Aftenposten
1 April 2011
The concert hall was not full despite the fact that Guro Kleven Hagen, 16 was soloist with the Oslo Philharmonic. Parents introduce their babies to sing-along, drive their children to music lessons, but do they ever invite their teenagers to classical concerts? Could one imagine a better meeting with classical music than this concert? Guro Kleven Hagen is a musician with lots of talent. She plays with natural musicality, her technique is impressive, her intonation good and a lovely stage presence. She won both the audience and the orchestra and received enthusiastic applause which was highly deserved. The challenge now must be to develop the talent further, create a great artist and not be satisfied with only a good violinist. Few have better chances of succeeding than this young lady. Erlend Hovland
Expectations Fulfilled
Dagsavisen
1 April 2011
The expectations to 16 year old Guro Kleven Hagen were fulfilled in her first meeting with the Oslo Philharmonic. She plays with a large deep sound, even and straight forward, without unnecessary drama and impressively secure in the top. The harmonics stand shiselled and have the same flow as the rest of the concert. Her playing is free and flexible and she plays with lively warmth.
Fantastic Guro
Kulturspeilet
31 March 2011
It was no less than impressive and fantastic to experience Guro Kleven Hagen playing the demanding Tchaikovsky concerto in her debut with the Oslo Philharmonic. She does not yet have the same weight and maturity but her playing did remind one of Anne Sophie Mutter when she played the same piece in Oslo some years ago. We are very impressed and are certain that this is the beginning of an internationeal career. Kjell Moe
Exceptional!
Oppland Arbeiderblad
1 April 2011
We had just witnessed and exceptional interpretation of Tchaikovsky's Violin Concerto played by an exceptional violinist. It was not an ordinary debut with the Oslo Philharmonic where the orchestra wishes to put spotlight on a young artist, but a regular subscription concert. Kleven Hagen's playing captivated from the first tone and it was remarkable to hear the dynamic contrasts. Technically she is a perfectionist so everything is in place and enables her to play the music as she wants to. Brilliant, light and transparant, but never betraying Tchaikovsky's Russian pathos. She played the second movement with fine colours and the third movement was held strictly towards the climax. The audience rose spontaniously and gave Guro standing ovations.

Violin Concerto in A minor, Op. 82

Sonatina for Violin and Piano in G major, Op. 100

If I am not for Myself, who will be?