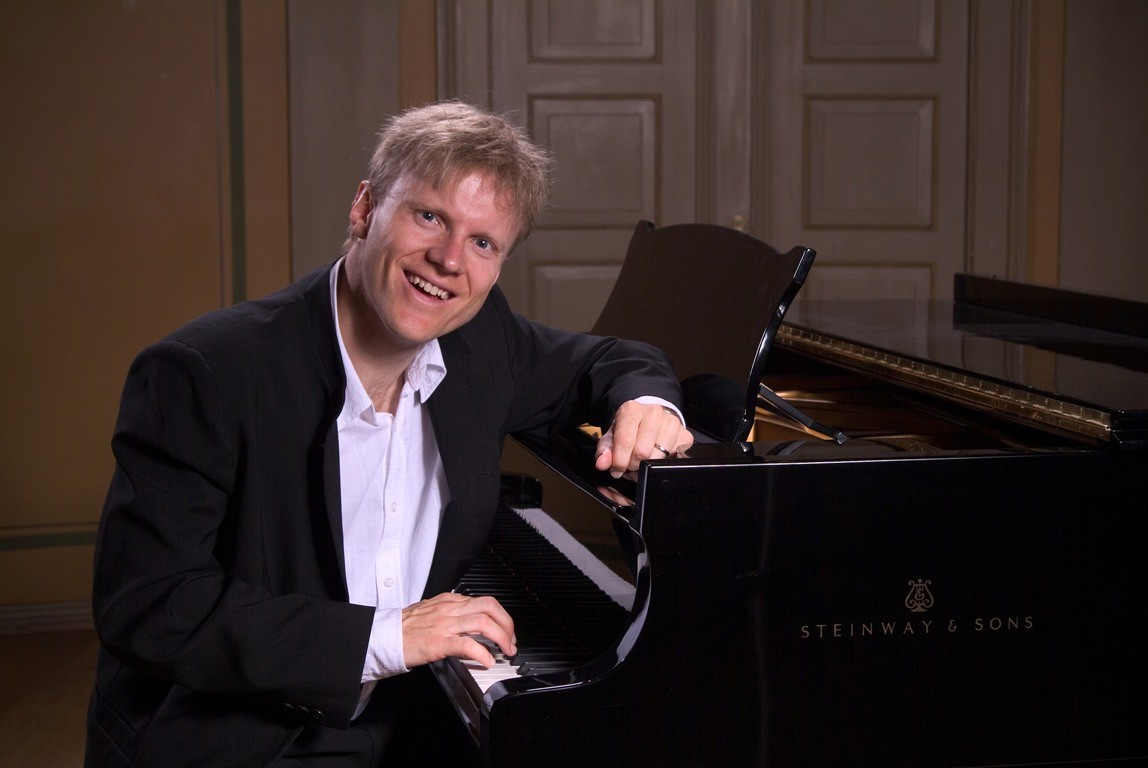 Håvard Gimse is now firmly established as one of Norway’s leading musicians with a bold and expansive repertoire, including an impressive list of 30 performed piano concertos, he is heavily in demand as both soloist and chamber musician and his vast experience means he is also the accompanist of choice to many of Scandinavia’s finest artists.

After gaining his Diploma at the Hochschule der Künste Berlin in 1995 with Hans Leygraf, he continued his studies with the revered piano Professor Jiri Hlinka in Norway. He is the recipient of 1st Prize in the Jugend Musiziert Competition from 1987, and since then has been awarded many of Norway and Scandinavia’s most prestigious awards including the Steinway Prize in 1995, the Grieg Prize in 1996, the Sibelius Prize in 2004 and most recently the Norwegian Critics Prize for his performances of all of Beethoven´s Cello Sonatas with Truls Mørk at the Bergen International Festival in 2011.

Håvard’s great affinity with Scandinavian, and particularly Norwegian music, means he has become one of the arenas most influential and significant recording artists. His sympathetic approach and intelligent partnering of lesser known Scandinavian and Norwegian works, arrangements and composers always receive unanimously superb reviews and prizes including Diapson d’Or and Gramophone’s Critics Choice, encouraging and creating new and enthusiastic audiences. His most recent recordings include discs of Schubert and Schumann with Henning Kraggerud for NAIM, which was nominated for the Spellemanpris (the Norwegian Grammy) in 2011 and his recording of Grieg pieces with Truls Mørk. Recent solo discs include repertoire by Chopin and Grieg for NAIM, Sibelius, Grieg and Tveitt for Naxos and Grieg Violin Sonatas for Sony, and his concerto discs include all five of the 5 Tveitt Piano Concertos for Naxos, Grieg with the Royal Scottish National Orchestra and he will record Poulenc’s Double Concerto with Christian Ihle Hadland with the Norwegian Radio Orchestra in January 2011. In December 2012 he released "Arvesylv" on Fabra Records, containing works by Tveitt, Sæverud and Mørk Karlsen.

Håvard Gimse has performed on many of the world’s most prestigious stages including the Wigmore Hall and Carnegie Hall in New York, Palais des Beaux Arts in Brüssels, and the Concertgebouw in Amsterdam. Recent solo appearances include the Recital Hall in St Petersburg, Suk Hall in Prague, and the Konzerthaus in Berlin. Recent partnerships include appearances with Truls Mørk across Spain, Italy and Germany, Berlin Konzerthaus and Carnegie Hall with Tine Thing Helseth, recitals in Germany with Alina Pogotskina and the Wigmore Hall with Marianne Thoresen.

In Norway he is in continual demand for his themed recital programmes with musicians, actors and other artists. He has just completed a highly successful tour throughout the whole country performing a programme of Ole Bull’s music in his 200 year anniversary with the eminent Norwegian violinist Arve Tellefsen.

He was Artistic Director of the Elverum Festival and now sits on the Artistic Board of the Oslo Chamber Music festival. He performs regularly at all of the Norwegian festivals including the Bergen, Trondheim, Oslo, Risør and Stavanger Chamber Music Festivals where he is called upon to perform varied and extensive programmes with many combinations of artists.

Born in Kongsvinger, about an hour drive east from Oslo, Håvard is the middle child of 3 brothers, his younger brother being a cellist and Artistic Director of the Trondheim Soloists. Håvard Gimse combines his hectic concert schedule with a Professorship at the Oslo Music Conservatoire as well as giving regular master classes across Norway and beyond. Håvard’s high level of artistry, broad experience, easy going and positive nature means his creative output has a significant and far reaching effect on audiences both at home in Norway and abroad.

Hindemith: 4 Temperamenter for Piano and Strings

Klaus Egge: Concerto for nr. 2 for Pianos and Strings

Excellent Performance
Göteborgs-Posten
29 November 2014
..."Håvard Gimse's playing is out of the ordinary. There is an exceptional clarity and the music sounds like it is freshly laundered. The rhythmical movement and the dancing character gives Grieg's romantic reveries new life and one is drawn into the rhythmic drive. It is simply put an excellent performance. Håvard Gimse with Stavanger Symphony Orchestra in Göteborg Concert Hall
Sibelius Bagatelles, Pieces and Esquisses
UK Grammophone
1 October 2004
Chips from the Master’s workbench they may be, but Gimse performs them with consistent style and obvious affection. Nearly an hour of innocuous listening, then, but dipping in is never less than a pleasure When Håvard Gimse plays with such consistent style and obvious affection. Very good sound, too, provided you don’t object to the occasional distant twitter of sparrows nesting in the rafters.
Havard Gimse at Wigmore Hall, London
The Independent / Music
18 March 2003
Rarely is a pianist so at ease as Havard Gimse. The mechanics of playing seemed to come naturally, so that he could concentrate on listening to himself. The first half of his programme particularly invited this attentive quality, with the strange Norwegian resonances of five folk-song arrangements by Geirr Tveitt (1908-1981), and the rather stop-start set of variations, forever fading wistfully, that make up Grieg's misleadingly titled Ballade. The theme was so delicately played, so subtly suggestive...