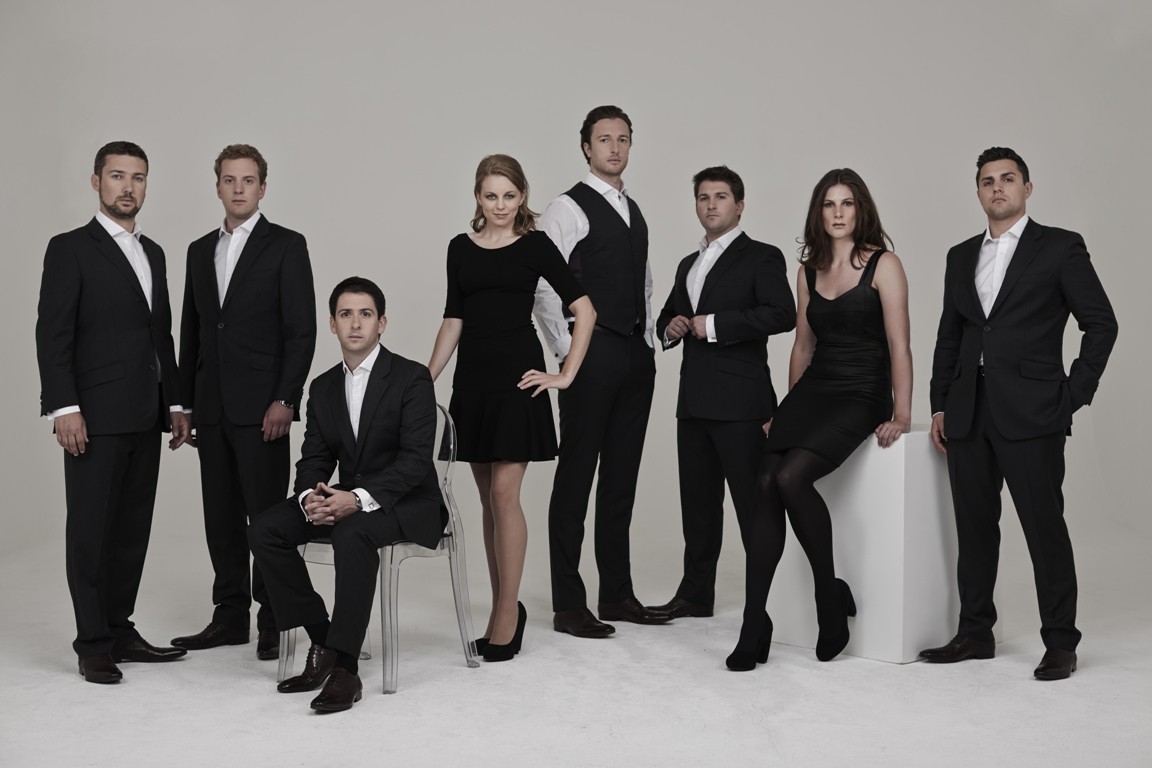 The British vocal ensemble VOCES8 is now established as one of the most versatile and best-loved singing groups in the world. Touring extensively throughout Europe, North America and Asia, the ensemble performs a repertory from Renaissance polyphony to contemporary commissions and arrangements.

With an ongoing programme of recordings and live broadcast, VOCES8 is heard regularly on international television and radio, including MPR, the BBC and Classic FM. VOCES8 is a Decca Classics Artist and will release its second album this season. The debut album, 'Eventide', went straight to the top of the Classical Charts on its release. The ensemble has also recorded a series of award-winning discs for Signum Classics, with 'A Purcell Collection' released most recently in April 2014 (BBC Music Magazine Critics Choice). In 2013, the ensemble was nominated for seven CARA Awards, winning in the categories for Best Classical Album and Best Classical Song. VOCES8 is an Ambassador for Edition Peters with whom it publishes arrangements and educational material, including the 'VOCES8 Songbook' and 'The VOCES8 Method'.

As the flagship ensemble of the charitable music foundation Voces Cantabiles Music (VCM), VOCES8 has an enviable reputation for its education work. The ensemble leads an innovative series of music education workshops reaching 20,000 people annually around the world with the aim of inspiring creativity and excellence through music. The innovative education work of VCM has received praise from UNESCO and since 2005 has raised £1 million towards music education in the UK. In 2013 VCM established the Gresham Centre in partnership with the Diocese of London, a vocal Centre for Excellence at Sir Christopher Wren's beautiful St Anne & St Agnes Church in the City of London. This season VOCES8 continues as resident ensemble at Bedford School, Ardingly College, Bradfield College and The Grey Coat Hospital, and begins a new relationship with Birmingham University. It also leads the Milton Abbey Summer School.

VOCES8 has received support from Arts Council England, the Musicians Benevolent Fund and the Worshipful Company of Musicians. The group is also grateful for the support of official sponsor, T.M.Lewin.

"The slickest of the lot... fans of a cappella ought to hear this."
CD Review, BBC Radio 3

"Eight beautifully integrated solo voices… Every number here has something particularly arresting within it, all supported by persuasive and committed singing." BBC Music Magazine Choral and Song Choice, A Purcell Collection

“The singing of VOCES8 is impeccable in its quality of tone and balance. They bring a new dimension to the word 'ensemble' with meticulous timing and tuning." Gramophone

Lux – the Latin for light – brings radiance, hope and comfort; from the pale glow of the moon or starlight to the blaze of summer sun, it nurtures both the body and the spirit. There is something inherently comforting about the sound of unaccompanied voices in harmony, as this luminous selection of pieces demonstrates.

The artistic focus of Eventide is one of subtlety and contemplation. Adopting a plainchant thread throughout, Eventide unites original compositions and sublime new arrangements of celebrated repertoire to create a compelling album.
A Purcell Collection. This is a sumptuous collection of early works by Henry Purcell, one of England's most celebrated composers. Joined by the specialist early music ensemble 'Les Inventions', the group explores Purcell's astoundingly diverse output.
A Choral Tapestry explores the rich vocal timbres of sacred vocal music spanning five centuries. Interweaving genres create an ethereal sonic tapestry that centres around the haunting beauty of William Byrd's Mass for Four Voices.
These six motets emanate Bach's Lutheran faith and demonstrate the essential parallels between this belief and his art. This brilliance motivated VOCES8's recording of Bach’s Motets, communicating his music with passion and exuberance.
Aces High is a scintillating collection of VOCES8's unique interpretations of jazz and pop favourites and theme tunes from the legendary James Bond movies, exclusively arranged by the ensemble’s Arranger in Residence Jim Clements.
Christmas. A heart-warming selection of the ensemble's favourite seasonal music. VOCES8 presents an array of works influenced by the group’s inimitable zest for performance and love of all periods and styles of music.
In the Beginning. This EP includes a selection of jazz and pop arrangements from the Arranger in Residence, Jim Clements to celebrate the ensemble's fifth anniversary.
With eight songs for eight-part vocal groups, the VOCES8 A Cappella Songbook includes many of the group's favourite songs – ranging from folk and classical through to spiritual and pop.